TTA-UC is a process based on annihilation of triplet states of two organic dyes (emitters). The spin-allowed annihilation leads to generation of a singlet state with higher energy and emission of a photon. As direct radiative population and relaxation of emitter triplet states are spin-forbidden processes, sensitization of the emitter triplet levels via energy transfer (TTET) from a triplet level of another dye with efficient intersystem crossing (sensitizer) is required. TTA-UC results in the conversion of visible or near infrared photons to photons with higher energy, e.g. green-to-blue, red-to-blue, red-to-green, etc. up-conversion. TTA-UC is a developing technology that can only enable spectral conversion under moderate excitation conditions (comparable with excitation by solar illumination). 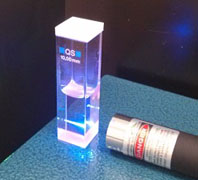 Fig. 1 Scheme of triplet-triplet annihilation up-conversion; Blue emission under 530 nm excitation in a solution of platinum octaethylporphyrin and perylene.

A current PhD project in area of TTA-UC relays on synthesis of new dyes and host matrixes in order to improve photophysical properties of UC system, e.g. to increase quantum yield and “anti-Stokes” shift, to reduce oxygen quenching and photo degradation.

Is a part of the DFG Priority Program 1928 “Coordination Networks: Building Blocks for Functional Systems”. In collaboration with Prof. Seitz from University Tübingen we are developing synthetic access to lanthanoid-based coordination networks (COORNETs) and a comprehensive understanding of metal-to-metal EnT involving lanthanoids. Lanthanoid-based, heterometallic COORNETs with non-statistical metal distribution are the only viable model system to study the crucially important metal-to-metal energy transfer and its impact on the photophysical properties (e.g. UC photoluminescence) because only these materials can provide both exquisit stereocontrol of the photoactive lanthanoids, as well as the possibility for long-range energy migration.

Fig.1 Schematic representation of the heterometallic COORNETs intended to be used in the course of the project for metal to metal energy transfer - Incorporation of the lanthanoid complexes into the linkers moieties.

Singlet molecular oxygen (related to reactive oxygen species) has found several applications in environmental, medical and chemistry fields of science where degradation of persistent pollutants in water is one of the profitable but underrated applications. Anchoring photosensitizer to the membrane represents an innovative way of producing photocatalytic surfaces capable of both retaining and degrading pollutants, so called self-cleaning surfaces. Stability of immobilized sensitizer is expected to enhance due to suppression of aggregation effect and reaction kinetics here is to be investigated. The search for a stable photosensitizer is still on operation so the challenge of this topic is to find what compounds and what ways of immobilization are preferable in order to achieve better performance of modified membrane.

Within the project, Photonic Markers, we are developing up-converting and down-shifting materials for applications in areas of plastic sorting and anti-counterfeiting in collaboration with Polysecure GmbH, Freiburg. We perform optimization of the optical performance of the luminescent materials and relate this back to the host material choice and quality. Overall, Photonic Markers represents an intensive three-year project that opens up access to the commercialization of know-how in area of fluorescent materials and long-term cooperation with the growing industrial partner.

Fig.1 Up-conversion luminescence under 980 nm excitation in an oxide host co-doped with ions of rare-earth metals

Understanding and Tuning the Optical Properties of Inorganic Nanocrystals (UTOPIAN)

UTOPIAN is the research project developed by a young scientist Damien Hudry and it stands for understanding and tuning the up-conversion emission in inorganic nanocrystals. UTOPIAN’s main goal is the rational design of nanoscale building blocks for spectral conversion and their application in bio-sensing and bio-imaging. 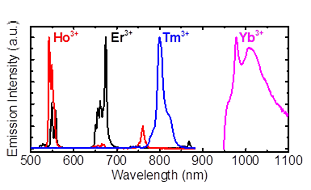 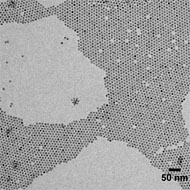 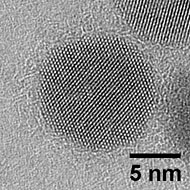