Hierarchical structures offer countless opportunities from microfluidic applications to optical features. The combination of two distinct features has already been implemented for example in cellular research with the fabrication of micro-wells with surface features tailored to the demands of cell adhesion and growth as well as cannulae with drag reducing inner walls [Truckenmüller, Heilig].

For smaller feature sizes, necessary for optical applications in the infrared and visible wavelength regime, we devised a completely new approach based on shape memory polymers (SMP). With nanothermoforming we are able to fabricate hierarchical structures on wafer sized areas in the micrometer and sub-micrometer range - two orders of magnitude smaller than any previously reported features.

We use a shape memory polymer as an active mould insert. The SMP is structured by thermal nanoimprint and constitutes the first level of hierarchy. Subsequently we temporarily flatten the surface and deposit a polymer film using Spincoating. The polymer film can be structured also using thermal nanoimprint, forming the second level of hierarchy. Finally the sample is heated to initiate the recovery mechanism of the SMP. It reverts to its initially imprinted surface geometry, thereby deforming the polymer film on top. The final sample yields a superimposed structure composed of the primary features imprinted in the SMP and the secondary features imprinted in the polymer film on its surface. 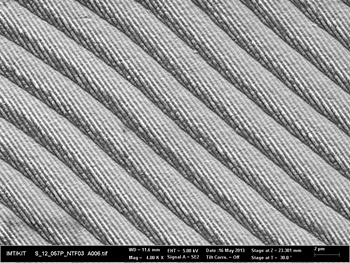 Using this method we are able to replicate hierarchical optical features on large areas, as demonstrated for example by the biomimetic features inspired by the famous Morpho rhetenor.